We had a fantastic turn out for our annual forum event, which took place at Standlake Village Hall on 25th November.

We started by giving an overview of what’s been going on with the Lower Windrush Valley Project in 2019, giving updates on improved signage at the reserves and paths, wildlife surveys for water voles, reptiles, birds, events we've put on and attended, and what we’ve got planned for 2020. We also displayed the maps created by the Thames Valley Environmental Record Centre which show all of the habitats across our project area. 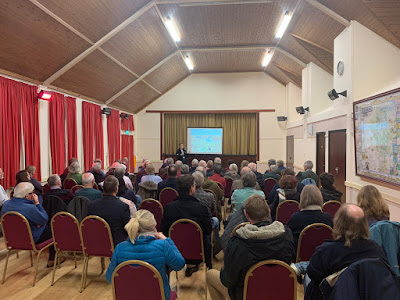 This year we had a local history theme to the forum – gravel extraction works have given researchers a unique opportunity to reveal some fascinating secrets of what used to happen in the project area.

Paul Smith, the recently retired director of Oxford Archaeology first talked about the settlements uncovered at Dix Pit. As well as Iron Age ring barrows, both early Roman and middle Roman features have been discovered, with a road running though the site. The settlement is thought to have had an unusual focus on raising cattle - this is suggested based on the layout of the road and buildings, with only a few domestic buildings present and the presences of artefacts such as the spoke of a wheel that cattle would likely have pulled. Various other small objects have also been found during the dig, including shrines, carved figures, gemstones and over a thousand coins.

Dr Kate Scott from the University of Oxford then spoke about the prehistoric mammals that used to roam across Oxfordshire. Excavations at Stanton Harcourt revealed that a previous course of the River Thames flowed through the area several thousand years ago. Over a thousand bones from mammals that were drawn to the river, including lions, bears, wolves and mammoth, have been found, as well as well preserved vegetation and molluscs. Mammoths made up the majority of the finds, with over 50 tusks excavated, many of which were complete – interestingly these are not the larger woolly mammoths that were adapted to cold environments, but instead are smaller steppe mammoths that were found on grassy plains.

Many thanks to our speakers for such fascinating talks.

We are so grateful for the continued support from our volunteers, whether coming to our work parties, helping out at our events, surveying for wildlife or doing admin and research at our office. We hope 2020 will be an even bigger year for our project, and we look forward to seeing you all then!
Posted by Lower Windrush Valley Project at 06:00